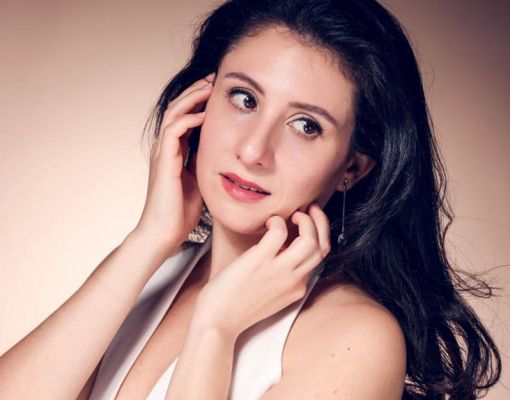 With an exceptional vocal technique and a timbre opulence that is rare for this range, the Brazilian-Chilean coloratura soprano Maria Carla Pino Cury is establishing a flattering reputation on the international music scene.

Maria Carla was born into a musical family in Paraíba, Brazil. She began her studies at the Federal University of her hometown and, after a master class with the famous Margreet Honig in Santiago (Chile), she was invited to study at the Musik-Akademie Basel in Switzerland. There she obtained her Bachelor's degree in 2016 and her Master's degree in 2018, receiving the highest praise from the unanimous jury. In 2017 and 2018, she was named Talent of the Migros Culture Percentage Foundation. Also in 2018, she received the First Prize of the Baseler Förderpreis Stiftung BOG. In 2022 she was a finalist in the prestigious Paris Opera Competition.

During her studies in Switzerland, Maria Carla worked closely with the Theater Basel for several years. There she made her debut in the roles of the Princess, the Bat and the Pastourelle in Ravel's L'Enfant et les Sortilèges. On this stage she played Lucia in a highly acclaimed production of Britten's The Rape of Lucretia, Papagena in Mozart's Die Zauberflöte, The Sun and The Vole in Richard Ayres' The Cricket recovers. She also impersonated Serpina in Pergolesi's La Serva Padrona in a production by the Kammerakademie Basel. She performed with the Kammerorchester Basel, notably in Mozart's virtuoso concert arias.

The young soprano sings throughout Europe, as well as in her native South America. She has appeared at the Krzysztof Penderecki European Centre for Music in Poland, at the Rheingau Music Festival in Germany, and in Italy under the baton of Gustav Kuhn. In Brazil, she has been invited by the Paraíba and Campinas Symphonic Orchestras, performing for example at the International Virtuosi Festival. In Chile, she has collaborated with the Concepcion Symphony Orchestra in the framework of the Chilean Lyrical Convention, where she has received an award for her achievements abroad. In concert, Maria Carla performs works as diverse as Villa-Lobos' Bachianas Brasileiras, Mozart's Great Mass in C minor, Handel's Messiah or Bach's cantatas.

From 2018 to 2020, Maria Carla was a member of the Opera Studio of Deutsche Oper am Rhein, Düsseldorf-Duisburg. Her roles included, among others, Oberto in Handel's Alcina, Tebaldo in Don Carlo and the Page in Verdi's Rigoletto, The Sandman in Humperdinck's Hänsel und Gretel, The Queen of the Night and Papagena in Die Zauberflöte für Kinder, as well as The Princess in Marius Felix Lange's The Snow Queen (a role subsequently sang at the Bonn Opera).

This season, Maria Carla Pino appears in Pascal Dusapin's Macbeth Underworld at the Staatstheater Saarbrücken (a production that will be revived at the Grand Théâtre du Luxembourg), sings the soprano part in Mendelssohn's oratorio Elias at the Konzertverein Langnau in Switzerland, and the role of Galatea in Handel's Acis and Galatea with the Orchestra of the Schola Cantorum Basiliensis under Francesco Corti.

In the summer of 2022, she will make her French debut at the Festival d'Aix-en-Provence as Lucia in the world premiere of Il Viaggio, Dante by Pascal Dusapin, directed by Claus Guth, a collaboration with the Paris Opera and the Staatstheater Saarbrücken.