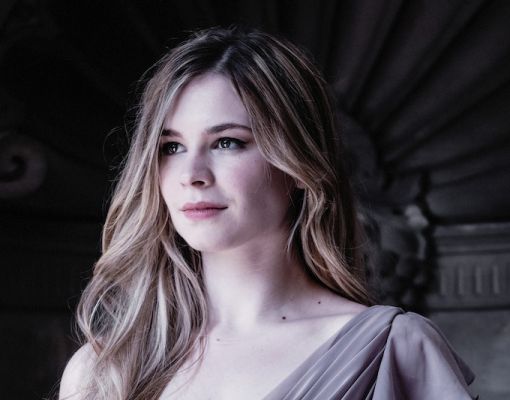 At just 20 years of age, the Franco-Catalan soprano Lauranne Oliva made a strong impression at the 2020 edition of the famous 'Nuits Lyriques' competition in Marmande, winning the Women First Prize in the Opera category, the First Prize for the Best Newcomer as well as the Second Prize in French Melody. In particular, her interpretation of the famous aria "Ah non credea mirarti" from Bellini's La Sonnanbula highlighted her unquestionable vocal beauty and virtuosity.

As a hard-working student, she combines a flawless academic record, obtaining a double baccalaureate in science and Spanish literature and history, with her musical studies at the Montserrat Caballé Conservatory in Perpignan. She begins with piano and musical training, then enters the classes of Sabine Riva and Christian Papis in singing. There too, her schooling ends with great distinction (Prix d'Excellence) in May 2021. Moreover, in August of the same year, she receives the highly prized Richard Wagner International Scholarship by the Wagner Circle in Nice.

Lauranne quickly performs in concerts, notably with the Orchestre Symphonique Perpignan Méditerranée conducted by Daniel Tosi in the role of Susanna in Les Nozze di Figaro, but also in major choral scores such as Palmeri's Misatango, Haydn's The Creation, Mozart's Missa solemnis or Schubert's Stabat Mater.

It is her meeting with the tenor Emiliano Gonzalez Toro, founder and conductor of the ensemble I Gemelli, that enables her to add baroque operas to her repertoire. She makes brilliant debuts with the roles of La Música and Euridice in Monteverdi's L'Orfeo (Opéra de Tours, Théâtre de Poissy) and La Fortuna and Juno in Il Ritorno d'Ulisse in patria by the same Monteverdi (Théâtre des Champs-Élysées, Arsenal de Metz, Victoria Hall in Geneva) in October 2021.

In September 2021, she joins Opera Studio of Opera du Rhin, with whom she will perform La Princesse and La Chauve-Souris in Ravel's L'Enfant et les Sortilèges at Colmar Comedie.

In 2022-2023 season, Lauranne is taking off. At Opera du Rhin, she will perform Eurydice in Gluck Petite Ballade aux Enfers and sing the role of Drusilla in Monteverdi's Coronation of Poppea under the direction of Raphaël Pichon and his Pygmalion. She will sing this same role, this time, under the conducting of Emiliano Gonzalez Toro and his I Gemelli, at Theatre des Champs Elysees in Paris, at Arsenal in Metz and Victoria Hall in Geneva.