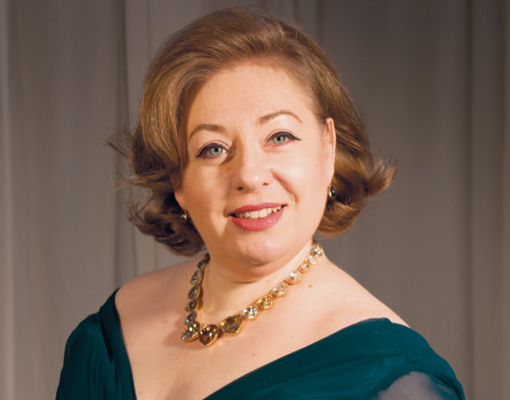 Inga Kalna was born in Riga, Latvia. After completing her musicology studies at the Latvian Academy of Music, she completed her voice studies with Joy Mammen at the Royal Academy of Music in London, where she graduated receiving DipRAM, the highest award for performance.
After a very successful debut as Pamina in Mozart's Die Zauberflöte Inga Kalna joined the Latvian National Opera as soloist, where she performed roles such as Mimi, Gilda, Lucia Di Lammermoor, Violetta and Alcina.

In London she made quite an impression as La Contessa in Mozart's Le Nozze di Figaro, with the orchestra conducted by Sir Colin Davis. In Great Britain she has received the Goldberg Operatic Prize and the Bruce Millar Memorial Trust Award. In Germany, she was awarded the Wilhelm-Oberdörfer-Preis.

The artist has twice been awarded the Latvian Theatre Prize for remarkable results. Since 2017 Inga Kalna is a Commander of the Order of the Three Stars, the highest civilian award of Latvian Government given to the artist in tribute to her outstanding achievements.

In 1999 Inga Kalna became a soloist at the International Opera Studio of the Hamburg Opera. The audience came to appreciate her convincing performances as Olympia, Antonia and Stella in Offenbach's Les Contes d'Hoffman, Adina in Donizetti's L'Elisir d'amore, Lucia in Lucia Di Lammermoor, as Gilda in Verdi's Rigoletto as well as a breathtaking Violetta in La Traviata. She enchanted the Hamburg audience in operas such as La Bohème, Boris Godunov, Dialogues des carmelites, Turco in Italia among many others.

Other engagements have taken her to the Nederlanse Opera, The Vlaamse Opera, Bavarian Opera, the opera houses in Lausanne, Toulouse, Madrid, Barcelona and the Bolshoi Theatre in Moscow. She made her Salzburg Festival debut in 2006 as Die erste Dame in Die Zauberflöte under maestro Riccardo Muti. A year later she was heard as Handel's Alcina at the Opera National de Paris. In 2009, she made her La Scala debut in the same role.

During the 22-23 season, we will hear Inga in the production of Robert Devereux of Donizetti at Zurich Opera. She will participate to several concerts in Latvia.

Inga Kalna is also much sought after for her masterclasses, which she gives regularly in Riga.